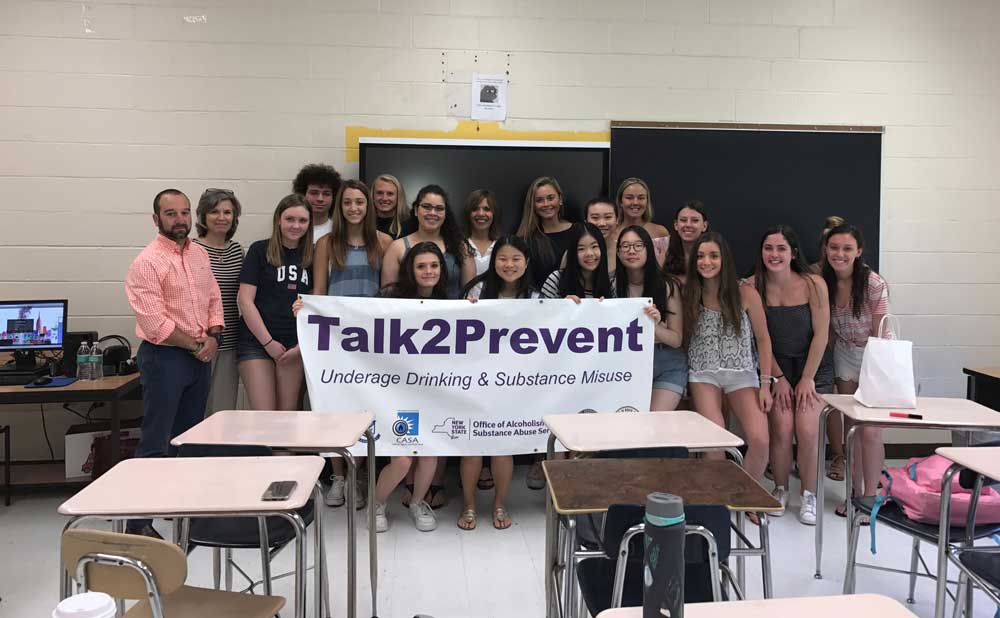 Manhasset CASA’s Talk2Prevent Campaign recently hosted Kings Park Parent, Linda Ventura, to talk in Chris Keen’s AP Psychology classes at Manhasset High School (MHS).  Ms. Ventura discussed the loss of her son to a heroin overdose, the effects his substance use had on her family and awareness of the stigma of addiction and recovery.  Students were engaged and moved by her personal story and conviction to change the landscape by which prescription drug and heroin use exist on Long Island.  Alex Mazer, an 11th grade student at MHS, thoughtfully shares his thoughts on the presentation:

“Eleven point seven – that’s the age of kids taking their first drink now. It’s gone down,” stated Ms. Ventura. “What grade even is that..?” a student asked. “6th and 7th graders,” Ventura replied. That’s how Mrs. Ventura began her presentation to our AP Psychology class.

Everybody knew her story, whether it be from her presentation to the students back in October or from a teacher informing them, so when she began to speak, the early class jitters and settling down process ended immediately. There was a ubiquitous deference.

However, that formal dynamic is not what ensued. Ms. Ventura created a casual, but personal environment where she promoted conversation; she wanted students to speak openly and trust her. Inciting that, she started by bringing up the topic of stress—a topic prevalent if you ask any student, but often neglected by parents. “Shouldn’t this be the time of your life?” she joked.  Pummeled with hours and hours of homework on top of extracurricular actives, high school students often miss out on that aforementioned aphorism. But when they escape, this is how they do it. This was how Thomas did it.

Thomas Ventura, Ms. Ventura’s son, overdosed on heroin while he was still in high school. We students knew we were not getting another lecturer. We were getting someone who had seen it first hand, and is forced to live with it every single day for the rest of her life. That’s powerful in itself, without even having to say a word. But Ms. Ventura chooses to speak for a reason. She saw the obvious option of letting the emotion overcome her, and instead chooses to let it drive her. “Life is still good.” That is what she still tells her family. “I’m a kickass Mom. And I’m kickass in Albany.”

Ms. Ventura is a financial advisor for a living, but now protects the fates of adolescents for a career. Her message was clear: “This is a family disease.” Substance abuse affects her every day, and it affects every single person who knows the user. As a mother, she spoke to the intuition she had to differentiate the change in Thomas’s behavior from typical teenage moodiness, relating it to a baby monkey coming back to your home as a gorilla—“You just know – most people know, they just choose not to address it.”

Ms. Ventura did not come to scare us. She did not try to fear monger us with statistics. Her approach was different: she used the power of compassion. Every student understood the extent to which her son’s overdose has torn apart her life, to a point where she doesn’t have to throw out numbers to be heard. She was a genuine person standing up in the front of a classroom and explaining to high school students the reality of addiction.

The problem that exists is the stigma that surrounds drug use. If the goal is to fight substance abuse, then there must be some concrete course of action to help those affected. Ms. Ventura made the comparison to viral epidemics like the Zika virus and Ebola, pointing out how billions of dollars were spent proactively to prevent a disease that never even came, while we cannot even set aside money retroactively for an even greater epidemic that is barely even recognized as a disease. “Substance abuse is real, and it is a problem, but if you can overcome addiction, there’s nothing else you can’t handle,” noted Ms. Ventura.

As she spoke, I kept looking around the room trying to read the reactions of other students. I don’t drink, for personal reasons, but I knew exactly who in that room did, and regardless, when Ms. Ventura casually surveyed the class about who drinks, all that came back were giggles and a uniform silence.

I simply wondered just how someone could thoughtfully listen to Ms. Ventura’s heartfelt story on that Friday afternoon, while still planning to go out and disregard it that Friday night.  But as time passed, it was clear: each student was impacted. Not a smile cracked, not a grin formed, all to the point of two actually having to leave the room to collect themselves. Regardless of whether her message singlehandedly changed a student’s plans that night for the better, it was certainly received.